Reflections on Montserrat – crafting a viable economy for 5000 people

The chance to work with the Ministry of Communication and Works on the tiny island of Monserrat in the Caribbean last week gave me a rare opportunity to reflect not only on the economic viability of many of the UK’s Overseas Territories, but also on the ways that people living in small island states cope in the aftermath of physical disasters.  Montserrat was devastated by Hurricane Hugo in September 1989, leaving some 11,000 of the island’s population of 12,000 without homes.  Ten people were killed, 89 were injured, and the cost of the damage was reported to be at least $260 million.  In the years afterwards, substantial reconstruction took place, but then in 1995 the island’s Soufrière Hills volcano became active again.  The island’s capital, Plymouth, was soon buried by more than 12 metres of ash and mud, which also destroyed the airport and harbour.  The southern part of the island became uninhabitable, and a strict exclusion zone was introduced to limit future loss of life.  Then, in 1997 a pyroclastic flow passed down Mosquito Ghaut, overflowing the valley sides and killing 19 people who were in the exclusion zone.  Subsequently, there has been ongoing volcanic activity, mostly consisting of ash falls in the south of the island, but in 2009-10 further pyroclastic flows also occurred.  This double disaster had immense impact on the island’s population, with some 8,000 people choosing to leave, primarily for the UK which had granted the islanders full residency rights in 1999, and British citizenship in 2002.

Although I broadly knew about the island’s history, it is impossible to appreciate both the impact of these physical disasters, and the resilience of the people without actually visiting the island, and standing on the hillside overlooking the devastated city of Plymouth.  Having spent a couple of days with Montserratians before visiting Plymouth, and appreciating something of their warmth and generous hospitality, I was left with an overwhelming sense of sadness just standing on the edge of an ash filled swimming pool overlooking the devastated landscape of the island’s former capital.

Monserratians are determined people, and those who I met were adamant about not only their British citizenship, but also their love for the island and their wish to ensure that it has a viable economy for the future.  The cost of the necessary reconstruction and development is nevertheless very, very substantial.  Much is already being done: there are plans for a new harbour; geothermal drilling is underway to see whether it could provide a source of energy for the future; and a submarine cable is to be laid to support their international digital connectivity.  However, much still needs to be done to ensure that the island can once again be self-sufficient as it was before the volcanic eruptions.  The challenge is that it is extremely difficult to identify how best this can be achieved, especially with such a small population.

From my very short visit, it is not easy to see the niche areas that the Monsterratians can build upon to regain their economic vitality.  Thinking back to the late 1970s when the Beatle’s producer George Martin created the AIR studios, Montserrat was able to attract some of the world’s most famous musicians to its green and peaceful environment.  There are still beautiful landscapes on the island, but the nature of the recording industry has changed so much that it would be difficult to imagine such an ‘adventure’ working again.  Perhaps, though, George Martin’s house (Olveston House – on Penny Lane), which now serves as a most welcoming guest house for visitors, does indicate one way forward, in that the island could carve itself out as a niche for high quality, environmentally sensitive tourism.  It is certainly beautiful, and the people most friendly.  However, its airport is tiny, with the runway only able to take very small planes, and it requires a new, much larger harbour to attract cruise ships and yachts to the island. There remains, though, the inevitable “chicken and egg” problem: visitors will not come unless there are high quality facilities on the island, and few people are willing to invest without there being strong prospects for sufficient visitor numbers to enable them to recoup their investments.

On the more quirky side, any country has to turn to its strengths and opportunities.  The volcano itself is a source of interest to visitors on the neighbouring islands, with air tours regularly bringing people from Antigua to visit.  It seems a shame that Montserrat itself currently benefits relatively little from such initiatives, and it must be possible for innovative initiatives to be developed that could enable Montserratians to reap dividends from such opportunities.  For film makers wishing to produce films in apocalyptic settings, the old capital of Plymouth on Montserrat would make an ideal – albeit highly risky – setting!  The island is also known as the Emerald Isle of the Caribbean, not only because of its lush vegetation, but also because it was settled by Irish immigrants from St. Kitts.  The potential for its Irish heritage to be marketed much more strongly, could also foster enhanced tourism from Éire.  Some of the bays in the north of the island would also make ideal facilities for luxury yacht marinas, and their development could offer a very different kind of destination for those sailing the Caribbean.  Finally, the ultimate strength of any country is its people, and there is no doubt that better connectivity to the Internet will enable those who wish to stay on the island and build economic activity around the provision of digital services will  be able to do so much more effectively once the new cable is completed.  Already, one software company (Lavabits) is developing its business there, and with an educated population, well-connected to the diaspora living in the UK, there has to be further potential for the islanders to use the Internet, not only to attract tourism, but also to build a new digitally-based economy in Monsterrat.

It was a real privilege to spend time on the island.  I admire the resilience, fortitude and determination of those whom I met, and I greatly appreciated their warmth and generosity.

Reflections on the effects of the Eyjafjallajökull volcanic eruption 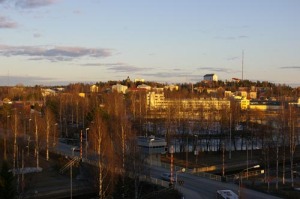 The transport disruption caused by ash from the erupting Eyjafjallajökull volcano has had enormous impact across the world, not only for economic activity but also for individual human lives.  Having been ‘stuck’ in the North Karelian town of Joensuu in eastern Finland for the last week, I have been interested and surprised by the emotional impact that this has had on me:

Apologies to everyone whose e-mails I have not responded to, and for the meetings I have missed!  I should have been back in the UK on the 18th – and it is now the 23rd.  Finavia this morning at last announced that “Based on the current forecasts all airports in Finland have been opened for air traffic and operate normally”, although lots of flights in Finland today have still been cancelled!  Hopefully tomorrow will improve, and I will indeed return home.  I intend to take a few days off – just to smell the late spring flowers, to taste some fine wine and to relax!