I have long argued that people tend to use the word “corruption” mainly to describe cultural practices that differ from those with which they are familiar.  It is a term that is almost always used negatively. Re-reading Transparency International‘s 2013 Corruption Perceptions Index has very much reinforced this view, but in a way that I suspect will not be expected by those who read what follows! 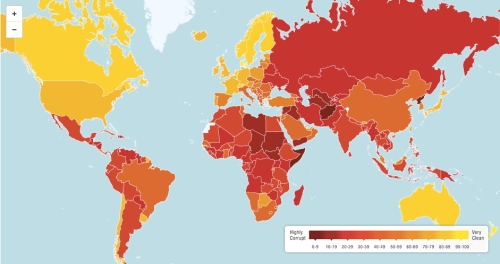 I have huge admiration and respect for the work of Transparency International. The map above shows the perceived levels of public sector corruption in 177 countries in the world.  In brief, it indicates that 69% of countries have a score of less than 50%, indicating a serious corruption problem.

However, what stands out most to me about this map is that it is very largely the countries of northern Europe, northern America, and Australasia that are perceived as being least corrupt.  The yellow “holiness” is so marked against the “evil” red of corruption that swathes most of the rest of the world!

Corruption according to Transparency International can be defined  “Generally speaking as ‘the abuse of entrusted power for private gain’. Corruption can be classified as grand, petty and political, depending on the amounts of money lost and the sector where it occurs”.

In short, I am more than ever convinced that “corruption” is simply a pejorative term that people use to describe political, social and economic systems that are  different from their own.  In a world dominated by capitalist interests, it is scarcely surprising that less-advanced capitalist economies are perceived as being more corrupt than those where the search for individual gain and success is highest.  Yet this very focus on individual gain in capitalist societies is itself fundamentally “corrupt”, since it detracts from the communal good which, at least for me, is ultimately far more valuable.  I suggest that we may have much more to learn from the mutually supportive social and cultural networks that underlie such “corrupt” regimes, than we do from the economic interests that determine definitions of probity in the capitalist heartland. However, this is because I believe that the common good is far more important than private individual gain.

5 responses to “Reflections on “corruption”…”