Servants of the poor – WSIS TalkX

It was a great honour to have been invited – a few hours beforehand – to give one of the inaugural WSIS TalkX presentations last Thursday evening as WSIS 2019 drew towards its close.  Seven of us had been asked if we would like to talk about our lives in technology for around 5 minutes. I opted to go last – just before the closing cocktail party.  Several colleagues had to leave before the end to get to other commitments and so they spoke first; I knew I would be remaining to enjoy the wine.  Before me there were some amazing, inspirational speakers: Stephenie Rodriguez, Joel Radvanyi, Gloria Kimbwala, Ayanna T Samuels, Sebastian Behaghel and Ted Chen…

With little time to prepare it was difficult to know quite what to say.  We had been asked to tell our own stories, and so I chose five images as five “scenes” around which to tell my tale.  Posting the images on social media, I had hoped that people might be able to see them as I spoke…

In reality, I’m not sure that many people actually saw the pictures, and I know many were rather confused when I began and introduced myself in the persona of one of my aliases.  I had, though, been introduced by the Master of Ceremonies as someone learning from the life of Hassan-i Sabbah… 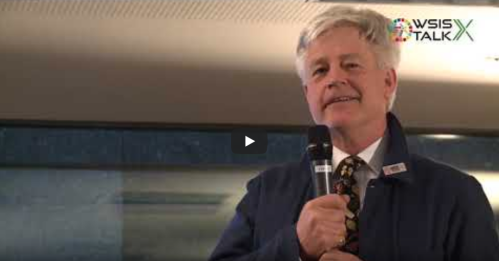 To see and hear what I had to say, click on the image above (or here).  Fully to understand it, though, you would need to listen to the other six talks, because I tried hard to link it to what the speakers had to say – especially, for example, about the best university in the world, and the SDGs!

I went seeking some new and interesting ICTs on my last full day in Delhi, and my colleague Anushruti kindly therefore took me to Nehru Place in South Delhi.   I had never been there before, and it turned out to be a fascinating exploration of Delhi’s digital world; a hive of activity, with hundreds of small tech companies each competing for business, seemingly mainly selling mobile devices or offering laptop and phone repair services.

Nehru Place was built in the early 1980s as a commercial district, focusing primarily on the financial and business sectors.  However, as new financial centres have emerged across the city, its traditional role has all but vanished, and it has now been taken over by numerous small ICT businesses; it has often been described as the IT hub of South Asia.  It has a very informal atmosphere, with people also selling software (often pirated) and other small digital goods as pavement vendors on the wide streets between the buildings.

It is a very male dominated environment, and I was also fascinated by the gendering of the ICT advertisements on display (there is definitely a research project to be done on this); the dominance of a few corporate names on the hoardings, mainly Chinese, such as Lenovo, Oppo and Vivo, was a further reminder that India does not yet have much indigenous ICT manufacturing.  The prices of many of the goods on sale were also surprisingly high (India is definitely not the place to buy Apple laptops!).

As the photographs below show, Nehru Place has a  run down feeling to it, but the informality and vibrancy are clearly indicative of a lively digital scene, and it very much reminded me of a digital beehive, with everyone labouring away in their own little cell of the honeycomb that is Nehru Place.  Sadly, I couldn’t actually find what I was seeking to purchase, despite being directed from one shop to another in the hope that I would be able to!

On a very hot Sunday afternoon yesterday, with temperatures reaching the high 90os F (high 30os C), colleagues (Priya Chetri, Srishti Minocha and Anushruti Vagrani) at IIT Delhi kindly took me out into the Haryana countryside where they are conducting a baseline survey on the use of mobile devices by farmers.  In the first instance, this is investigating how helpful meteorological forecasts are to the farmers, but in the longer term it is also going to explore how sensors might be able to provide more refined information that would enable farmers to increase yields and thus profitability.

This was a great opportunity to immerse myself once again in the sights, sounds, smells, tastes and touch of the Indian countryside.  We spent most of our time talking with farmers in the large village of Alawalpur, but after the interviews were over we were also shown one of  the village’s special sites, the Baniewala Mandir.  The temple itself was fascinating, but I had never expected to find the 500 cattle that are so well cared for alongside.  The freshly made chai massala made from their milk after the interviews were done was absolutely delicious!

I hope that the following pictures reveal something of the adventure.  I learnt so much, and am very grateful to Priya, Srishti and Anushruti for taking me there and to Dr. Upasna Sharma for arranging the trip.

The dogs of IIT Delhi campus

I am greatly enjoying living on the IIT Delhi campus, but have to admit that I am uneasy when walking past the many dogs that are usually roaming around in packs, seemingly on the look out for trouble!  There is always a sense of trepidation walking past them when they block the entrance to a building, or lie across the path!  Waking up in the night to hear them viciously barking, is also not exactly soothing!

Temperatures rose today, and I was surprised to see most of the dogs apparently asleep in the late afternoon sun.  This was definitely an opportunity to take my courage into my hands and photograph them! 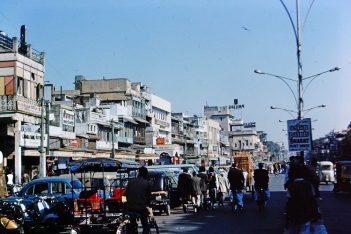 The first time I visited Chandni Chowk (Moonlight Square) in Old Delhi was more than 40 years ago in 1976 (picture to the right).  I remember its vibrancy, the vivid colours, the energy, the diversity of smells, the complexity of everything that was there.  It fascinated me.  I got lost.  I wandered.  I explored back alleyways.  I emerged, having felt something of the depth of Delhi; the ever living past in its present.

I had not been back until two days ago.  Much had changed; little had changed.  I was struck anew by the splendour of some of the old buildings; the mix of religions; the melting pot of cultures that was Old Delhi; the old wooden doors; the delicious food; the wonderful colours, especially of the saris; the dogs and cat; the pale skinned mannequins.  I had to go there, just to feel, smell, hear, see and taste Old Delhi; a special treat was to eat at Parawthe Wala on Paranthe Wali Gali – it is most definitely worth searching out for every imaginable sort of paratha!

I was so spoilt by my friend and colleague Anushruti Vagrani from IIT Delhi, who took me back to Chandni Chowk, and had patience with me as I just absorbed anew everything about the market. 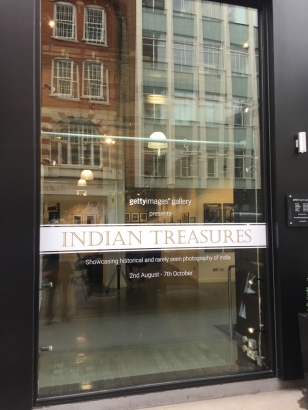 The small Indian Treasures exhibition on until the 7th October at the gettyimages gallery on Eastcastle Street (near Oxford Circus tube station) in London, is an amazing opportunity to see photographs of “India” dating from the mid-19th century.  It has been well curated, and represents a collection of very diverse photographs, drawn mainly from a European gaze on “British India”.  However, the collection also includes photographs from Indian photographers, and illustrates seven themes: photographs by Samuel Bourne between 1863 and 1870; sun pictures from the 19tb century, illustrating both landscapes and people; methodologies, including four tinted photocrom prints; images by the photojournalist Felice Beato; studio portraiture; Princes of India; and the work of the London Stereoscope Company.

The exhibition raises so many fascinating questions, especially at a time when we “celebrate” 70 years of the independence of India and Pakistan, and remember the many atrocities that accompanied the birth of these two countries.  In particular, it highlights the way in which imagery was used to reinforce cultural stereotypes, and also the use of photography in the 19th century to capture what are seen as particular racial types. 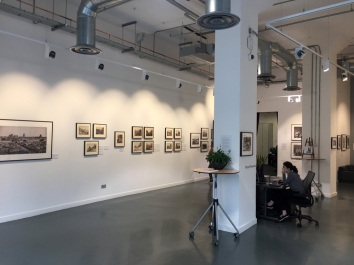 I was particularly struck by comparisons between the countries in the 19th century and how they are seen today:

Above all, I was left with huge admiration of the work of photographers from a century and a half ago, who dragged their cameras and equipment across the continent to “capture” these haunting memories of India’s treasures.  This is an exhibition to be savoured and enjoyed.  Not only are the images stunningly evocative, but they also force us to rethink our understandings of the British Raj.

This is the last, and most important, in my series of images from 1976 and 1977 when I was in what was then South Bihar (now Jharkhand) in India.  I had the enormous privilege of assisting Sudhir Wanmali who was then undertaking research on the hats, or periodic markets in Singbhum District.  He taught me so much, not formally but just by being with him, watching and listening to how he interviewed, and above all by seeing the ways in which he interacted with people.  His wisdom, enthusiasm, generosity and passion for research were, and indeed still are, inspirational.

The hats are markets that take place regularly in different locations, and provide an opportunity not only for rural people to sell to the itinerant traders and others in the market, but also to buy things that they need and do not produce themselves.  As the following images show, it was possible to buy and sell almost anything you might need there, from the cloth, pots and brightly coloured glass bangles brought in by traders, to sweet potatoes, onions, tomatoes and many other vegetables, as well as the cattle and goats being sold by the farmers.  Some traders also collected products such as lac, collected in the forests by the people who lived there, and others would also buy up small amounts of paddy that farmers brought for sale. At the end of the day, I remember rice beer being sold in simple cups made of leaves.  The pictures below are mainly from places such as Bangaon, Hat Gamharia, Nakti, Tebo and Jagannathpur.

Sudhir’s work was published in an excellent monograph – Wanmali, S. (1981) Periodic Markets and Rural Development in India, Delhi: BR – but is also written up in other papers, including:

At the time, I was also working on medieval England and drew parallels between marketing systems that had been created there in the 14th century, and those that I had experienced in Singbhum. This was published as:

I very much hope that these pictures, now some 40 years old, not only contribute to the archive of Jharkhand’s past, but also reflect the beauty of this special part of the world.  I often wonder how the lives of the many people I met there turned out…