Sexual harassment at international ICT events: a call for action

I have become increasingly saddened and dismayed in recent years at the level of sexual harassment, and what I see as inappropriate and unacceptable behaviour by a surprising number of men at the ICT conferences and exhibitions convened by some international organisations.  This ranges from generally loutish actions by some groups of young men, to what can only be called predatory behaviour by some older and more senior figures in the sector.  Until the last couple of years, I had thought that such behaviour had largely disappeared, but from what I have witnessed myself, from what I have heard from women in the sector, and from what I have read, it is clear that action needs to be taken urgently by all those in the sector, and particularly those who are organising conferences and events. 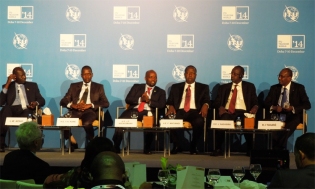 The ICT industry has for far too long been dominated by men, much to its disadvantage, and it is good that an increasing amount of publicity is being shed on the sexism that has come to dominate the sector more widely.  In 2014, the Guardian newspaper ran an interesting series of reports on the subject, one of which was entitled “Women ‘belittled, underappreciated and underpaid’ in tech industry“, and in 2015, the BBC also featured a report on “Sexism in Silicon Valley and beyond: tech wake-up call” following the case brought by Reddit boss Ellen Pao against her former employer, venture capitalist Kleiner Perkins.  However, this is the tip of the iceberg.

UN Women Watch has defined sexual harassment as “Unwelcome sexual advances, requests for sexual favors, and other verbal or physical conduct of a sexual nature”, and has provided an excellent detailed document describing this in more detail and giving example of verbal, non-verbal and physical sexual harassment.  Such behaviour can certainly be by both men and women, but the vast majority of perpetrators are men, and it is high time that concerted action is taken to stop it.

As a first step, I am issuing this call for all international organisations in the field of ICTs to issues guidelines on expected behaviour at their events.  I prefer guidelines to codes, because codes generally require policing, and the imposition of penalties or sanctions should anyone be found guilty.  In practice, this is extremely difficult to implement and enforce.  Guidelines, instead, reflect expected norms, and should be acted upon by everyone participating in an event.  If someone witnesses inappropriate behaviour, it should be their responsibility to take action to ensure that the perpetrator stops.  In far too many cases, though, people at present do not take enough action, especially when the harassment is by someone senior in the sector.  This has to change.  We must all take collective responsibility for bringing an end to such behaviour, so that everyone can participate equally at international ICT events without fear of being harassed because of their gender or sexuality.

To be sure, there are very complex cultural issues to be considered in any such discussion, but the fundamental aspect of harassment is that it is any behaviour that someone else considers to be unacceptable.  Hence, we must all consider the other person’s cultural context in our actions and behaviours, rather than our own cultural norms.  Just because something might be acceptable in our own culture, does not mean that it is acceptable in another person’s culture.  Despite such complexities, some international organisations have indeed produced documents that can provide the basis for good practices in this area.  Some of the most useful are:

I look forward to the day when all international ICT conferences do indeed have such guidelines on sexual harassment, and hope that this will begin to create a better, safer and happier environment where we can all work together more effectively to reach appropriate decisions about these important technologies and their use. 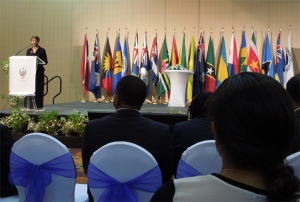 I had the privilege of being invited to moderate the session on government-led infrastucture development at the Caribbean Telecommunications Union‘s 25th anniversary event held in Port of Spain, Trinidad, this week.  It provided an excellent opportunity to discuss in quite some detail the balance between private sector and state investment in the ICT sector, and ways through which infrastructure could be made available to some of the poorest and most marginal communities.  As a moderator, I always see my role primarily as being to facilitate some lively, and hopefully provocative, discussion, and so I tried to say very little myself during the session. Reflecting afterwards, though, particularly in the wider context of the Commonwealth as a whole, the following broad observations seem appropriate:

Overall, it was a fascinating discussion that raised many interesting ideas.

As a young geographer, I had the privilege of learning from the extraordinary David Stoddart, and can never forget reading the numerous books and papers on small island ecosystems that he recommended to us in the mid-1970s – and being jealous that he was able to be doing research on beautiful far-away places such as Aldabra!  Likewise, Richard Chorley and Barbara Kennedy’s Physical Geography: a Systems Approach was required reading on several courses.  Although not quite as inspirational as David Stoddart’s physical presence,  I recall being enthused by this book to go back and read some of Ludwig von Bertalanffy’s work on General Systems Theory, and struggling to balance this with my own increasing interest in structuralism and Marxist theory.

Hence, I have always adopted a principled and historical understanding of the origins and development of the systems approach in academic discourse.  This has made me ever more infuriated by the irritating, and quite simply inappropriate, usage of the word “ecosystem” by so many people, particularly in the business sector, who persist in using the word ecosystem to describe the system of digital technologies, ICTs and telecommunications.  Better argued than most is the use of the word “ecosystem”, for example, in Martin Fransman’s The New ICT Ecosystem (Cambridge University Press, 2010), but it remains fundamentally misguided, and little is gained by adding the “eco” to the “system”!  Despite my constant pleading that such usage is quite simply wrong, and corrupts the meaning of the word “ecosystem”, I have never made headway on this, and so want to try to capture here the basis for my critique.

There are two main reasons why I am so offended by the usage of the word “ecosystem” to refer to digital ICT systems:

So, can people please stop using the word ecosystem to refer to the field of ICTs and telecommunications.  The word “system” alone seems just fine to describe the complex interrelationships and flows of energy between components in whatever integral whole those working in the ICT field want to talk about!

The UK’s Department for International Development has recently created a Digital Advisory Panel to provide advice to the Department in line with its digital strategy announced in December 2012.  The role of the panel is to take an overview of DFID’s strategy for digital and technology matters in its organisation and programmes, and to provide advice and challenge to the organisation. The panel met for the first time on 22nd October, and started to discuss the scope and priorities for their work programme.

The Chair of the Panel is Tim Robinson, CEO of LGC, and he joined DFID’s board as a non-executive director in May 2013.  Other members of the Panel (in alphabetical order, and as described by DFID blogger Julia Chandler) are:

I am delighted to have been invited to serve on this panel, and look forward to some lively discussion as we seek to guide DFID in its digital and technological practices.

Monitoring and Evaluation of ICT in Education initiatives: reflections from WISE

The second WISE (World Innovation Summit for Education) summit provided an opportunity for colleagues from Education Impact to host a lively and highly participatory workshop designed to contribute to more effective monitoring and evaluation of ICT in education activities, focusing particularly on developing countries.

It was premised on two assumptions:

and then why there is so little good and effective evaluation

and the things that need to be put in place to ensure better evaluation.

Clicking on the above mind-maps enables them to be viewed at full size!

UNESCO publishes report on ICTS for people with disabilities

UNESCO has recently published a short report by a group of experts on “ICT for persons with disabilities“.

This presented the following recommendations to UNESCO for consideration:

“Making UNESCO ICT-accessible
The group of experts recommended that UNESCO should ensure overall accessibility of persons with disabilities. To achieve this goal the Organization should improve its online presence and the accessibility of its website. It should also create accessible physical environment, develop appropriate procurement and recruitment policies, and ensure training and retaining of the employees.

Mainstreaming ICT in inclusive education
UNESCO is encouraged to foster effective use of ICT that are accessible, adaptive and affordable for person with disabilities. Specific guidelines and tools are needed to teach persons with disabilities and to ensure that corresponding ICT competencies are embedded in initial teacher training.

Mobilizing resources and international cooperation
The experts stressed the importance of identifying arguments for shifts in policy practices and determining funding opportunities where UNESCO could get involved. It is important to cooperate with organizations of persons with disabilities in order to get the best possible input and to have credible action lines and projects for funding.

Creating an information and knowledge access ecosystem
This recommendation focuses on “touch points”, such as WorldWide Web, broadcasting, publishing, languages, etc., in the system in which people and humans interact with information and services. It also includes e-governance, which could be used to promote e-voting and e-democracy initiatives for citizen participation in an accessible way, as well increase participation in cultural activities.”