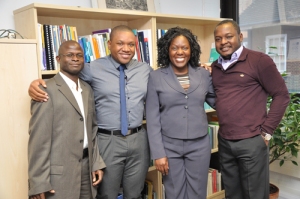 The Commonwealth Scholarship Commission in the UK has just announced the latest round of its exciting Professional Fellowships programme which is designed to enable citizens of ‘developing’ Commonwealth countries to spend time gaining relevant professional experiences in UK organisations.  Any UK organisations can apply to host people for the scheme (for between 1 and 6 months duration), and any interested individuals are recommended to contact organisations that have previously hosted such fellowships, or that might be interested in hosting them in the future, to see whether they would be willing to nominate them.  Individuals cannot apply directly to the Commission for these awards.  The closing date for organisations to submit nominations is 7th October 2013 for Fellows to start between January and December 2014.

Details of the scheme from the Commission’s website are given below:

Commonwealth Professional Fellowships support mid-career professionals from developing Commonwealth countries to spend a period of time with a UK host organisation working in their field for a programme of professional development. Fellowships are typically three months but can be between one and six months in length, and can include limited time for attendance at short courses or conferences, as well as visits to other organisations.

Programmes must have demonstrable development impact in the Fellow’s home country and the Fellow must be able to show how the knowledge and skills they will gain during the Fellowship will be disseminated after their return home.

Prospective host organisations might find it helpful to read about previously successful programmes:

2013 (Round 3) Professional Fellowships – information for candidates 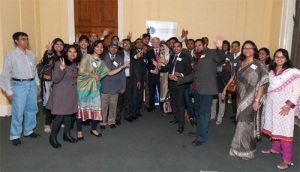 The Commonwealth Scholarship Commission has just announced its application process for scholars wishing to study in UK universities for Master’s and PhD degrees from the 2014-15 academic year .  Its Electronic Application System is now live, and will close on 3rd December 2013.  All applications need to be made through national nominating agencies – full details of which are available on the Commission’s website.  Summary details of the application process taken directly from the Commission’s site are given below:

Commonwealth Scholarships for students from developing Commonwealth countries are offered for Master’s, PhD, and split-site (PhD) study in the UK. These scholarships are funded by the UK Department for International Development (DFID).

Approximately 300 scholarships are awarded each year. The CSC invites around three times more nominations than scholarships available – therefore, nominated candidates are not guaranteed to get a scholarship. There are no quotas for scholarships for any individual country. Candidates nominated by national nominating agencies are in competition with those nominated by universities/university bodies, and the same standards will be applied to applications made through either channel.

Applications are considered according to the following selection criteria:

Please note that the CSC does not impose any age limit on applicants for its awards, but national nominating agencies may do so in line with their own priorities.

Candidates may also find the Feedback for unsuccessful candidates in 2013 useful.

You can apply for a Commonwealth Scholarship for the following levels of study:

All subject areas are eligible, although the CSC’s selection criteria give priority to applications that demonstrate strong relevance to development.

You are requested to apply for a course of study at a UK university with which the CSC has a part funding agreement.

All applications must be made through your nominating agency (or university/university body, if applicable) in your home country. You must check with them in the first instance for specific advice on how to make an application and for their own closing date. The CSC cannot accept any applications direct from candidates.

The CSC expects all Commonwealth Scholarship candidates to be nominated by an approved nominating agency/university/university body, and to have completed an application form using our Electronic Application System (EAS).

Full help on how to apply using the EAS is provided in our guides, which should be read in full before making any attempt to use the EAS.

The EAS will close to applicants on 3 December 2013 and no further applications can be made after that date. The CSC will not accept any applications which are not submitted via the EAS to the nominating agency/university/university body in the candidate’s home country.

Please note that all enquiries about these scholarships should be directed to the nominating agency/university/university body in your home country.

Following Professor Graham Furniss’s opening remarks, I was invited to speak in my role as Chair of the Commonwealth Scholarship Commission in the UK at the launch of the British Academy’s new report entitled “Working with Africa: Human and Social Science Research in Action” on 3rd March 2011.  My  short speech outlined the importance of the British Academy’s funding programmes, the difficulties facing African universities and academics, and the ways through which the Commonwealth Scholarship Commission (CSC) is seeking to support them in partnership with like-minded organisations.

I began by thanking  Graham Furniss, not only for his work at the British Academy in driving forward many of their African initiatives, but also for joining the CSC as a new Commissioner.  I then emphasised the quality of the research featured in Working with Africa and thoroughly recommended it to the audience as a good read.  I highlighted in particular the value of the British Academy’s past small grants programme, noting that small amounts of funding can go a long way in supporting outstanding and innovative research in the humanities and social sciences.  This is particularly true for UK researchers near the beginnings of their careers, but it is also very important for establishing networks and partnerships as exemplified by the Academy’s support for research in Africa.

Despite such funding, I emphasised the many challenges faced by African researchers, and the very difficult financial, infrastructural and capacity issues that African universities had to overcome.  I argued  that years of global emphasis on primary education in Africa had left the higher education sector in a very diminished state.  I also made the point that whilst much international emphasis is placed on support for scientific research designed to reduce poverty, research in the social sciences and humanities is at least as, if not more, important.  Such research helps develop understandings of critical issues concerned with governance, social equality, the law, cultural diversity and economic change.

Finally, I highlighted the critical role of the Commonwealth Scholarship Commission in supporting research and professional development in Africa.  The last decade has seen a transformation in the Commission’s activities, so that far from being a traditional awarder of basic scholarships, it now provides seven different kinds of award, including distance-based studentships as well as professional and academic fellowships.  Moreover, evidence from the CSC’s monitoring and evaluation programme clearly indicates the value that these have in terms of development impact.  The Commission is delighted that it continues to have the strong support of the UK government, and that DFID will be providing some £20 million a year towards its programme of awards in developing countries in the 2011-15 period.  To be effective, though, it is important that we work together in partnership.  I concluded by reiterating my thanks to the British Academy and also emphasising the need for the Commission and the Academy to work closely together in the future to achieve our shared objectives of enhancing scholarship in African universities.

Vacancies for Two New Members of the Commonwealth Scholarship Commission

The Secretary of State for International Development is looking to appoint two new members to the Commonwealth Scholarship Commission in the UK.

There are 15 Commissioners, drawn from a range of academic, development, diplomatic and private sector backgrounds. Their roles are to:

Candidates are also encouraged to find out more about the work of the Commission from its website, from which annual reports and other key documentation can be downloaded.

Full details of these vacancies are available at http://www.cscuk.org.uk/about/vacancies.asp

As Chair of the Commission, I would be very happy to discuss the post with interested applicants.

All forms should be completed and returned to the following address: