Why the notion of “frontier technologies” is so problematic…

The term “frontier technologies” is increasingly being used to refer to the latest generation of technologies, especially digital technologies.  It is often also associated with the deeply flawed concept of a “fourth industrial revolution”.  The UN in particular has latched on to “frontier technologies”, mainly in the context of the impact of  Artificial Intelligence (AI) and Machine Learning, as for example in the UN Chief Executives Board for Co-ordination’s series of papers on Frontier Issues, and UN DESA’s Economic Analysis and Policy Division’s work on Frontier issues: the impact of the technological revolution on labour markets and income distribution.  Sadly, much of this work is ill-informed, and reflects a particular set of interests.  Whilst there is indeed some interesting academic work on the potential of so-called “frontier technologies” for international development, as with Ramalingam, Hernandez, Prieto and Faith’s (2016) IDS report on Ten frontier technologies for international development, most such research fails satisfactorily to consider the deep problems with the notion and the interests that underlie it.

In undertaking some foresight work for UNICEF recently on the future relationship between digital technologies and learning, I had the chance to reflect on some of these challenges and interests, and I am sharing these reflections below, in the hope that readers will understand more about the implications of such terminology, and will cease to use the term!  These are the introductory few paragraphs to a section of my report for them on Technological changes over the next decade:

“Currently, much attention is being paid to the likely labour impacts of the latest ICTs, and the kinds of education that will be required to enable people to gain appropriate employment in the workplaces of the future.[i]  The term “frontier technologies” is now frequently used to describe the latest technologies,[ii] and their implications for education have recently received increasing attention.

However, the concept of “frontier technologies” is deeply problematic, as is the notion of a fourth industrial revolution.[iii]  Such terms are used largely by, or about, the “heroes” of these self-conceived revolutions, in the hope of a self-fulfilling future; they beg no critique, nor any consideration of those left behind.  For example, the notion of “frontier technologies” draws heavily on the deeply embedded idea of the “American Frontier” in which US “civilization” was forged westwards, in large part through the use of new technologies. 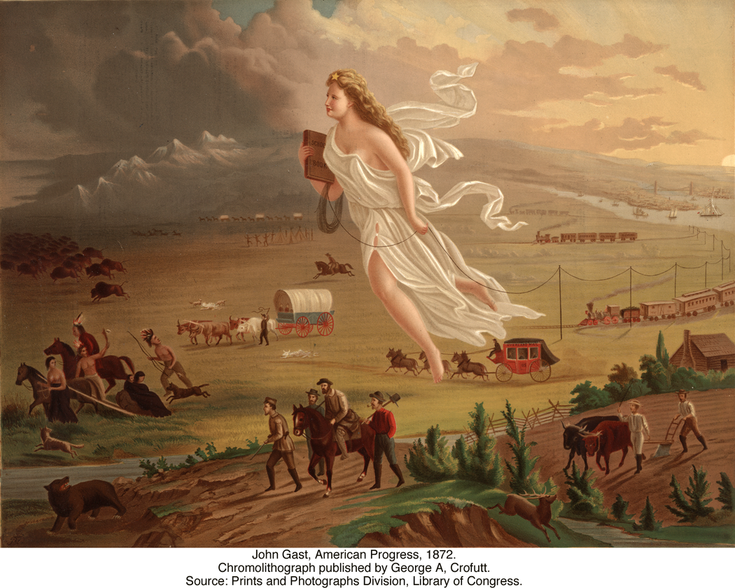 The Frontier is thus conceived heroically, with the “savage” Native Americans, or First Peoples, being pushed westwards, to be replaced by “civilized” people mainly of European origin, as so clearly illustrated by John Gast’s famous late-19th century picture above.  Whilst the frontier was seen as being positive for the Europeans, carrying with it images of heroism and taming of the wilderness, it was anything but that for the Native Americans.  The latest “frontier technologies” of the 21st century can similarly be seen a vehicle through which USAn-led neo-imperialism is being further enforced on “peripheral” peoples and states beyond the “frontier”.  It is therefore strongly to be recommended that such terminology is rejected by those organisations and entities concerned with enhancing education in these poorer, more deprived contexts.

At a more mundane level, one person’s frontier can be someone else’s backwater; a 2G phone may indeed be novel to someone who has never had one before, whilst even a chip implant is now becoming passé for the digital human who has everything. This section therefore seeks to avoid such terminologies, and focuses instead simply on some of the most likely implications of technological change for education in the near future.”

[i] See, for example, DESA (2017) Frontier Issues: the impact of technological revolution on labour markets and income distribution, https://www.un.org/development/desa/dpad/wp-content/uploads/sites/45/publication/2017_Aug_Frontier-Issues-1.pdf, accessed 30th March 2018.  There is considerable debate about the likely impact of AI on labour, and employment, with the latest OECD report arguing that the potential for AI to lead to considerable employment loss has been exaggerated in the past; see Nedelkoska, L. and Quintini, G. (2018) Automation, skills use and training, Paris: OECD, DELSA/ELSA/WD/SEM(2018)3, https://www.oecd-ilibrary.org/docserver/2e2f4eea-en.pdf?expires=1522776823&id=id&accname=guest&checksum=A498DE4EAEA4DDCC90DBE424AFB8DB0A, accessed 3rd April 2018.